We at the Miami Breast Center are extremely excited this month because the prestigious American Society of Plastic Surgeons (ASPS) has finally given our BRAVA + AFT breast procedure the official seal of approval! For years Dr. Khouri has been conducting a clinical trial along with other plastic surgeons documenting the success of his technique. The complete study was published in the May issue of Plastic and Reconstructive Surgery, the official medical journal of the ASPS. It  confirms that pre-expanding the breast with BRAVA, prior to surgery, provides greater augmentation than fat transfer alone. It features Dr. Roger K. Khouri, MD, FACS of the Miami Breast Center as the lead author of the study.

Fat transfer to the breasts has become increasingly popular in recent years. During this procedure, fat is obtained by liposuction from one part of the body and transferred to the breast. The limiting factor is the relatively low survival of transplanted fat. On average only 55 percent of the fat survives. The reason is simply that there is not enough room within the breast for the fat to survive and thrive.

In Dr. Khouri’s procedure, BRAVA + AFT (autologous fat transfer), the patient first undergoes “pre-expansion” by wearing BRAVA, the special suction-pump bra, a few weeks before surgery. During this time BRAVA gradually expands the breast through gentle vacuum pressure creating extra room in the breast. This expansion also generates a matrix or fibrovascular scaffold that is an ideal recipient for the transplanted fat cells. BRAVA is also worn for at least one week after surgery. The results measured by MRI scans before and after surgery show an average fat survival of 80 percent!

Dr. Khouri also has a variation of this technique for breast reconstruction patients with amazing results. 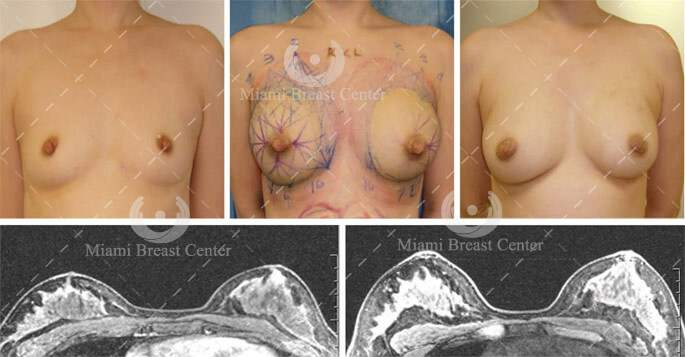 The Comparison One Year Later

At one time fat transfer to the breast had been banned by the ASPS but that ban was lifted as promising research emerged. Dr. Roger Khouri has always been at the forefront of that research pioneering the way with the latest technology. Click to read the full Clinical Study of Breast Augmentation with Fat Grafting using BRAVA.

Dr. Khouri has helped hundreds of women who don’t want implants. Whether you’re a breast cancer patient looking for a natural breast reconstruction with fat transfer or just looking for natural breast enhancement the best results in fat transplantation are achieved by pre-expansion with BRAVA. As this new study clearly shows, it provides the optimal conditions for successful fat transfer to the breast.