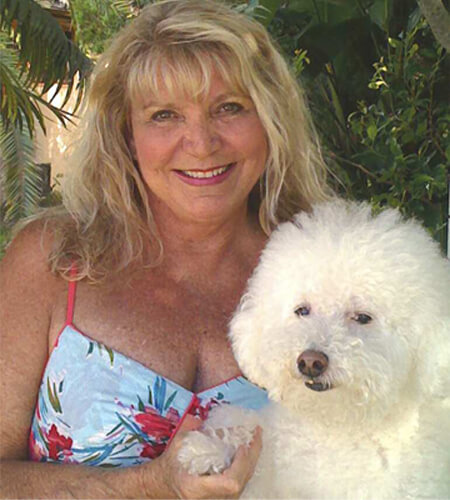 “I feel very blessed to be rid of my cancer and to have found Dr. Khouri. He made me feel and look normal again”

I am an artist, singer, songwriter, and author. I am 63, a mother of two, and grandmother of seven. I am a very positive person who loves life. My life was interrupted in July 2011 when I was diagnosed with breast cancer. After three lumpectomies, with one unclear margin each time, I was told I needed to remove my breast. After talking with family and doctors, I decided to do a double mastectomy.

A very close friend who is a nurse told me about her friend who had cancer and suggested I talk to her. Penny lived in Miami and had been through a lot of different surgeries on her breast before she found Dr. Khouri. She was extremely happy with her reconstruction results. She suggested I come down and stay with her and visit Dr. Khouri to see for myself.

Dr. Khouri was very professional and innovative with a brilliant mind and a good sense of humor. He explained his BRAVA plus fat transfer procedure in laymen's terms. It was fascinating and made total sense to use one's own body fat to replace one's breast. I was not too sure how implants would look after a mastectomy and wasn't too keen on having a foreign object inside of me. Especially since they usually need replacing from time to time or worse yet could calcify and become hard from scar tissue. I talked to many women who had cancer and had never heard of Dr. Khouri's invention. Most were horror stories about reconstruction.

Dr. Khouri introduced me to the BRAVA bra, which he invented to be a non-intrusive way to stretch one's skin after a mastectomy. This way, the stretched skin had a housing for one's body fat. Depending on size and body type, it could take two to five procedures. He could only put so much fat in at a time to be sure the fat stayed alive. Since I was having a double mastectomy, he set me up with an oncology surgeon he worked with.

When I had my mastectomy and the chest muscle was exposed, Dr. Khouri laid a layer of my own body fat that he liposuctioned from another part of my body onto my chest muscle. When I woke, I actually had a bump and was not concave.

I bought a very soft bra that opened in the front. The bra had pockets that I stuffed with soft cotton to wear when I went out. After each procedure the cotton became less and less until I was pleased with my final results.

This procedure takes a diligent and patient person, but the results speak volumes. There is, on the average, a two-week recovery period for each procedure with usually six weeks between procedures. I only took two weeks off each time and was able to work the next four weeks before I began my next procedure.

It has now been one month since my final procedure. I feel very blessed to be rid of my cancer and to have found Dr. Khouri. He made me feel and look normal again. The results are amazing and I look good in all types of clothes. I have my life back.