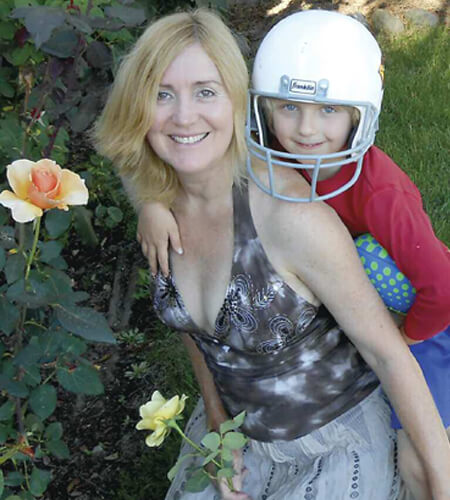 “In my research I learned there is not another procedure out there that is able to preserve sensation of the breast.”

In 2010 I got the diagnosis that every woman dreads: "You have breast cancer." I was shocked to hear this as I never dreamed that I could get it. I have been a vegetarian/vegan health nut for most of my adult life, and I thought this would make me immune to getting cancer. Boy was I wrong!

At first, I opted to turn down surgery, radiation, and all other traditional forms of treatment and followed a very strict raw food and juice diet for one year. I had Stage 0 DCIS so I thought it would be prudent to try a gentle, alternative treatment first. Twelve months later, I had another mammogram, hoping for the best. I was disappointed when there was no change.

The radiologist told me that my left breast continued to show the distinct pattern of DCIS he saw a year ago. Now I had to decide how to proceed with my cancer treatment. I was given the option of a lumpectomy or mastectomy.

I figured I could rid myself of the cancer fairly easily with a lumpectomy. Yet again, I was wrong. Two lumpectomies later they were still unable to get clear margins.

Now I had to decide what I was going to do. A double mastectomy or a single. And what about reconstruction?

So I began to do intensive research. My breast surgeon told me that my reconstruction options were implants or some type of flap surgery. I was positive that I did not want implants, so I began researching the different variety of procedures. I decided on a TUG flap breast reconstruction procedure that uses the upper inner thigh tissue to construct a breast. I met with a plastic surgeon who advised me that I was the perfect candidate for a TUG. However, she also advised me that I would be in the hospital for seven days. For three of those days she said that I would be on strict bed rest. After my discharge I would continue to be on some very strict restrictions like no sitting upright, no lifting and no driving. How could I do this? I had a baby and a four year old at home. I was not happy with this option.

And then Lady Luck came calling. I came across Dr. Khouri's name on a www.breastcancer. org forum. Women were discussing the TUG procedure on one thread, but then I was led to a thread about reconstruction using only your own body fat. I was so intrigued that I read the entire thread, 32 pages of posts, in one afternoon. I was convinced—this was the reconstruction option for me. I immediately made an appointment and within a month I was on my way to Miami to see Dr. Khouri.

Dr. Khouri put me completely at ease as he described the procedure and what I could expect post operatively. I was relieved to hear that there were very few, if any, post-op restrictions and that I could go back to my normal activities within a couple of weeks.

I also opted for a prophylactic mastectomy of my other breast. This was because they had found DCIS in my second lumpectomy that did not have associated calcifications. I was worried that I could have cancer in my other breast too that might not show up on a mammogram. I was not taking any more chances.

Dr. Khouri gave me the name of a wonderful breast cancer surgeon who I met with that same afternoon. His name was Dr. Torres-Salichs. We made plans for a bilateral mastectomy with immediate reconstruction by Dr. Khouri.

The one thing I can say about my surgical team is that I am convinced that they are two of the most talented surgeons in the world. Dr. Torres-Salichs was able to complete my bilateral mastectomies through two very small incisions along the side of each nipple. (I had elected nipple-sparing mastectomies.) Dr. Khouri was able to complete my first round of reconstruction at the very same time, so that when I woke up, I had small A cup breasts. What a blessing. I never had to experience being completely flat again.

Okay, here is the part that most people can't believe: within one week of surgery, my family and I took a vacation in the Florida Keys! I was not 100% but I was definitely not in bed on severe restrictions. Instead, I lounged by the pool, took walks around Key West, and went out to dinner. I have photos of me during that time, where I look completely healthy and without pain standing in front of a tourist attraction at Key West.

I was super thrilled with my looks and my ability to go on vacation with my family just one week after a full bilateral mastectomy with reconstruction. One week later when we returned home (two weeks post-surgery), my son started kindergarten. I was able to drive him to school, walk him to class, and give him big hugs and kisses without any restrictions.

I saw Dr. Khouri for three more surgeries over the course of a year to complete my reconstruction. The result: a miracle. My breasts looked completely normal and healthy with minimal scarring. Perhaps one of the most wondrous benefits is that I can feel my breasts! I was told by my previous surgeon that I would never be able to feel my breasts again post-mastectomy and reconstruction using a TUG. Actually, in my research I learned there is not another procedure out there that is able to preserve sensation other than through fat grafting. I am extremely thankful for this. My breasts not only look normal, but they feel normal as well.

So, here I am one year post-mastectomy with wonderfully soft, natural, sensate breasts. However disappointing it was to have to endure breast cancer, I cannot imagine a better outcome. I am hopeful that this procedure will be available to women all over the world so that they can experience the gift that I have been blessed to receive. Dr. Khouri is truly a pioneer in the world of breast cancer reconstruction, and I am so very thankful to have been blessed to be one of his patients.