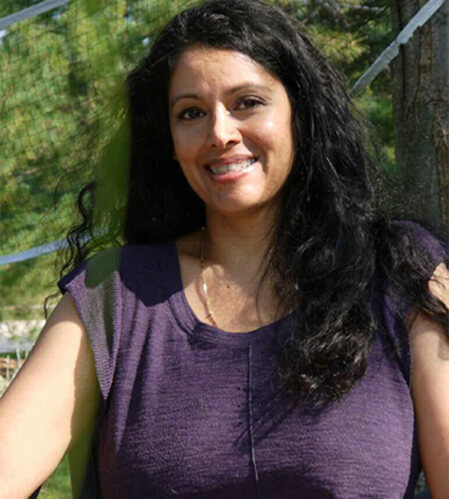 “I wake each day grateful that Dr. Khouri has given me back what cancer took away... For this, I am eternally thankful”

I was 43 when I got my first mammogram. I would have liked to put it off even longer but went in to satisfy my ever-worrying mother. Two days later, my doctor left a message on the phone. I kept missing her calls so I asked my mom, "Do they call you after you get a mammogram to tell you everything's fine?" Worried voice: "No, they never call me. They just send me a card!" That was the start of my journey into cancer land.

A stereotactic biopsy led to an excisional biopsy which bore the eventual diagnosis: Ductal Carcinoma In Situ. After recovering from the shock of having a diagnosis containing the word carcinoma, I learned that DCIS was not fullblown cancer. The cancerous cells were still in situ or contained within the duct walls. As far as breast cancer goes, this was the kind to get. I had won the cancer lottery. But instead of sending me a prize, the cancer lottery commissioner had left a bag of flaming poo on my porch. The biological characteristics of my DCIS meant I was at an elevated risk for recurrence, and studies had shown that half of all recurrences were invasive. My breasts had gone rogue. They had to go.

I started researching my options for reconstruction after mastectomy. I considered implants and flap surgeries, but neither seemed a good choice for me. A tendency to scar heavily meant I would probably experience rapid capsular contracture around any implants, requiring revisions to remove the implants and scar tissue. Similarly, flap surgeries involve moving chunks of flesh around, which would create a significant scar that I knew my scar-happy skin would form into a permanent keloid. Plus, there was the risk of the entire flap failing and having to be removed. I was floundering around in indecision.

Around this time I found www.breastcancer.org, which became my lifeline to a whole community of women dealing with breast cancer. This is where I first heard of fat grafting reconstruction: creating a whole breast using only fat grafted from your own body. No implants, no additional scars, no possibility of flap failure, rupture, or rejection. I was scared it was too good to be true.

I researched the procedure and all indications were that fat grafting was a common and safe procedure that had been in use for decades. However, there was just one surgeon who had mastered the technique of building the entire breast from grafted fat: Dr. Roger Khouri.

My husband and I flew to Miami to meet with Dr. Khouri. I was so relieved to have my husband with me because I could only manage to croak out a word or two during that consultation. All I can recall about that visit is that I knew Dr. Khouri was at the forefront of something big (the handful of international plastic surgeons following him around to learn his methods were a clue) and that he had agreed to help me.

Dr. Khouri did my first round of fat grafting at the time of my double mastectomy. He took fat from my stomach and transferred it to create a breast mound. Even after a previous breast reduction, I was a size DD going in to the mastectomy. After the surgery, I had loose skin which made it look like my breasts had been deflated. This was hard to look at for two months before my next grafting session, but what I didn't realize at the time was that having this extra skin would make using the BRAVA so much easier. Instead of having to stretch out taut skin, the BRAVA just reinflated my breast skin without much trouble.

My rapidly expanded breast skin made it possible for Dr. Khouri to rebuild me into a size DD again in only three sessions of fat grafting. The most amazing part, though, is that my new size DD breasts are a better shape than I had before. Since the fat is grafted into the pectoral muscle, my new breasts are fuller and younger looking than they previously were.

Every method of reconstruction comes with its drawbacks. The two issues I can identify as challenges with this procedure are some distortion of the breast shape when flexing the pecs and the need to wear the BRAVA device. Because the fat creating my reconstructed breasts was grafted into and around the pec muscles, when I flex my pecs, the muscle draws the fat up and somewhat distorts the otherwise natural shape of the breast. This is not noticeable in clothes but only in the nude. Dr. Khouri said this is an effect with the procedure that can't be avoided but might be reduced with another grafting session to add fat where needed. Since I have no plans to do manual labor in the nude, I am not bothered by this.

The greater challenge for me was the BRAVA-wearing protocol. It was not easy and it was not fun. It takes dedication to wear this device and learn to sleep in it for the weeks before and after surgery. I found lots of help with this online, however, by connecting with patients who had gone through the process before.

I also learned that the liposuction part of this process was not a way to magically rid large amounts of fat from your body. I initially imagined Dr. Khouri suctioning off liters of fat, erasing all evidence of my decades of poor decisions. To my everlasting chagrin, this was not the case. Some of the fat Dr. Khouri removed by lipo came back in another place. If you are not at your "fighting weight" as he recommends when you have the lipo, at least you should understand that the lipo will not make you smaller but will just distribute your fat in a better way.

I hope that this method of reconstruction becomes more widely known to women who are facing breast cancer. The better reconstruction choices a woman has, the better the odds that she will have an outcome that leaves her restored to her natural state, free to go forward with her life without pain and the need for continuing surgeries. I wake each day grateful that Dr. Khouri has given me back what cancer took away. I am pain free, done with cancer surgeries, and whole again. For this, I am eternally thankful.