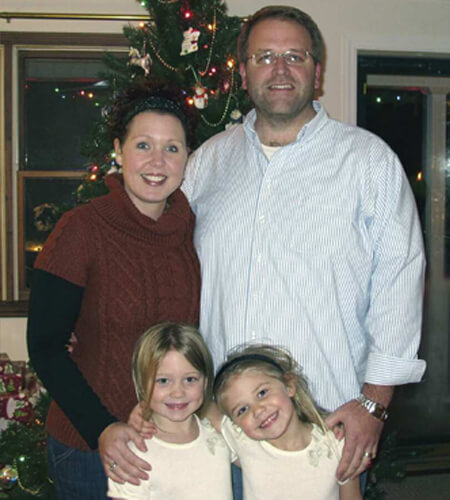 “I started running and this year I will complete four half-marathons in honor of my four years as a survivor!”

I was diagnosed with breast cancer on May 14, 2008. I found the lump myself while I was on bed rest during the end of my pregnancy with my daughter Ayda. I really thought that the lump was from my milk coming in early. After Ayda was born, I was able to breastfeed her normally. But the lump never went away.

At my six-week postpartum check-up, I mentioned the lump to my doctor. He immediately sent me to the breast center for tests. They gave me a mammogram, ultrasound, and biopsy, all on the same day.

Two weeks later they called with the results . . . it was Invasive Ductal Carcinoma. I had just given birth to my beautiful baby girl . . . and now I had cancer. I was overwhelmed and in shock to say the least. The first question out of my mouth to the nurse was, “Am I going to die?” I couldn't imagine leaving my two babies without a mommy.

During chemotherapy, I was exhausted for several days afterward. My family took turns coming to stay with us and help out as much as they could. But I am married to a saint! My husband, Micah, really took care of me and our girls. It was tough having an infant and a toddler at home. Every mom wants to be present and able to care for her own children. It made me feel guilty not being able to do “mommy things” on some days. Getting up with the baby fell to my husband for the few days following my chemo. However, I knew that I was doing the best I could. I was also able to work during this entire time due to my awesome co-workers.

I am a physician assistant and at the time I worked in convenient care. I still did my three 12-hour shifts per week. It just took some juggling of the schedule to make it happen! I was told by my general surgeon to wait at least one year before attempting any type of reconstruction. I had been through a lot physically (not to mention emotionally). My body needed time to heal. I took that time to do some extensive research. I knew right off the bat that an implant was not an option for me. I had a lot of radiation to my affected side and knew the risk of skin tearing would be high with an implant. That left me with the flap options.

I went to see two different plastic surgeons that specialize in DIEP flap surgery. After hearing what they both had to say, I was not convinced that this procedure was right for me. I didn’t like the fact that I would be under anesthesia for eight or more hours and that I would have to stay in the hospital at least five days. I also didn’t like that I wouldn’t be able to lift any - thing greater than five pounds for several weeks. I still had two kids in diapers at home, so this was not an option for me. I just knew that there had to be a better option out there.

One day when I was on the Komen message boards, I saw a post by one of Dr. Khouri’s patients. She was raving about her procedure. So, I went to www.MiamiBreastCenter .com and checked it out. I talked it over with my husband and decided that I needed to make a trip down to Miami to see this doctor.

After meeting Dr. Khouri and hearing his explanation, I felt like this was the way to go. It was less invasive and utilized my own tissue. I knew that it would take more time and more procedures. But, the recovery would be quicker, and I would be able to lift my kids.

He reconstructed my left breast. He lifted and reduced my right breast. He also filled in my left axilla with fat. That helped to alleviate all the pain I was having after my node dissection.

Let me start off by saying that it wasn’t easy. Not a walk in the park at all. But nothing with breast cancer is! I wore my BRAVA external skin expander at night. I put it on when I got home from work and took it off the next morning. It was mildly annoying but not painful.

After six weeks, I flew to Miami to have my first grafting. The grafting itself was painful for the first few days but very tolerable with pain medication. After each grafting I was sore, like a hard workout, for about four to five weeks afterward. In total, I had five grafting procedures. I also had a breast reduction and lift on my right side. It was a no-incision lift and reduction. It went very well!

Now, I feel great. I had my last grafting in November 2011. I could still stand to have one more to match the volume of my right breast but I’m in no hurry and may never do it. It’s so close that when I’m wearing clothes, you can’t even tell.

The lipo is an added benefit. It has reduced my belly and thighs. I am pleased with that. However, my thigh skin is a little more lumpy than it was before. I’m hoping that it will smooth out with time. About a year ago, I started running and this year I will complete four half-marathons in honor of my four years as a survivor!