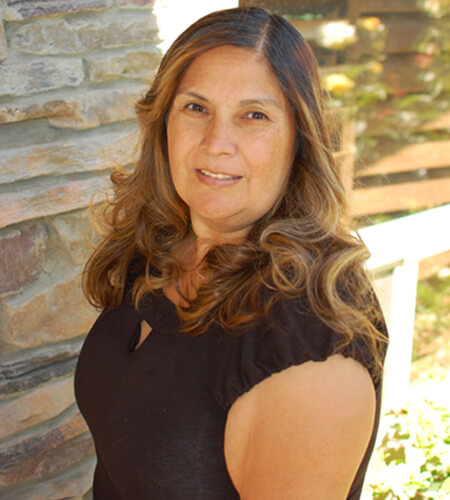 I have two older sisters that I watched go through many months of chemotherapy: Maria, diagnosed with ovarian cancer, and Kathy, diagnosed with Infiltrating Ductal breast cancer stage 3. During their battle with cancer, I decided to be tested. I tested positive for the BRCA2 gene as did my sister Maria. Being BRCA2 positive, I knew the odds were against me. I began my research and consultations with surgeons. I learned that I would be an excellent candidate for breast implants and made the difficult decision to go ahead with the prophylactic mastectomy along with an immediate reconstruction.

I first had expanders put in, as is the usual routine when getting implants. My left breast expanded appropriately, but it turned out that the 800 cc implant was too small for my shape and size. My right breast became an even bigger issue. That breast expanded to the point that my skin kept reopening. I could actually see the expander. I never even got to the point of having the permanent implant put in. "Awful" doesn't even cover how it looked. Back to surgery I went. Again and again. After four failed revisions, I knew I would not be a good candidate for breast implants, nor did I want them anywhere near my body.

On July 2011, I went to the FORCE Conference in Orlando, Florida. FORCE is a nonprofit organization that helps women like me who had the heredity cancer gene. Dr Khouri was a speaker in the reconstruction seminar.

I was amazed with his new reconstruction technique of fat transfer to the breast. I had no idea that I even had another option other than implants or a flap procedure. I never considered the flap since I was an EMT who needed full mobility and upper body strength.

In the Show & Tell Room of the FORCE conference, brave women shared their stories and showed off all stages and choices of different mastectomy reconstructive procedures. There I met one of Dr Khouri's BRAVA + AFT patients who totally impressed me. It was amazing how natural her breasts looked and felt. This living proof convinced me that this procedure worked.

The next morning my sister and I met Dr Khouri again. I was over-the-top excited with the possibility that I may have finally found a solution to my breast dilemma. He took his time explaining the process, the lipo, the BRAVA, and more. He looked at my disfigured breast and gave me hope—hope of repairing them and truly helping me feel normal again. Dr. Khouri was confident that he could fix what so many plastic surgeons before him couldn't and that this procedure of fat grafting would be an ideal solution for me.

I had turned into every surgeon's nightmare. As a tall woman with excess skin who had previously lost 140 pounds, I posed a unique challenge to say the least. But Dr. Khouri didn't seem to think it would be a problem. I later found out that many of his patients had problems with their implants. I was not alone.

His assistant Cindy put me on the schedule, and I arrived three weeks later, suffering from painful contractures from the expander and implant. They made me feel as if I couldn't breathe. I was so ready to move on and get this hardware out of me.

In the first outpatient procedure, Dr. Khouri removed the Alloderm expander and 800 cc implant. Incredibly, I woke from the procedure feeling better than when I went in. My body had been rejecting the foreign hardware. I felt so much better; I couldn't believe it.

Dr. Khouri wanted me to heal from that procedure for about 12 weeks before my second procedure. During the next surgery, he released the scars and started injecting the fat. I had scars so deep they looked like the Grand Canyon. I thought I could never look normal again. I had grudgingly come to accept the thought that I was going to have to live with the scars forever.

Procedure three went very well without any complications, and I looked more and more natural. Dr. Khouri's work exceeded my expectations. I just finished my last BRAVA + AFT surgery in May 2012 and I am shocked (good shocked) to see these big, round, beautiful breasts. I am a currently a DD cup but have the body frame to support it.

I am so happy with my looks now. My self-esteem is growing back and I don't feel scarred from having made a decision to live and not let cancer make my decisions for me. Since I had lost 140 pounds, the liposuction really helped in areas where I had not been able to lose weight. The body sculpting benefits are awesome!

Through my journey, five of my seven children tested positive for the BRCA2 gene. My 13- and 16-year-old sons have yet to be tested due to their age. I hope they will be when they are ready to make that decision for themselves. I have three beautiful daughters in their 20s that are facing the same decision: they are all BRCA2 positive. I know that when/if they make the decision to have a prophylactic mastectomy and subsequent reconstruction, it will be with Dr. Khouri.

My children were horrified to see me go through the countless failed implant procedures. I could see them begin to wonder if cancer/chemo would have been better than what I had to go through.

I knew that my unfortunate circumstances would raise question marks in my daughters' minds. I did not want them to play Russian Roulette with their lives. They've now seen me come so far and are amazed at how my breasts look after all the hardship I had to endure. One of my daughters even told me that my new breasts looked better now than they did before the mastectomy.

Dr Khouri has a gift that needs to be shared with the world. Women need to know that there is another way besides traditional techniques for breast reconstruction. My only regret is not finding Dr. Khouri sooner. I feel I am a pioneer for other women and am so grateful to share my story with so many women and doctors involved with my care back home. They are just so excited to see Dr Khouri's amazing BRAVA + AFT results. They know how far I have come.

Finally . . . there is hope for all women facing mastectomy reconstruction.