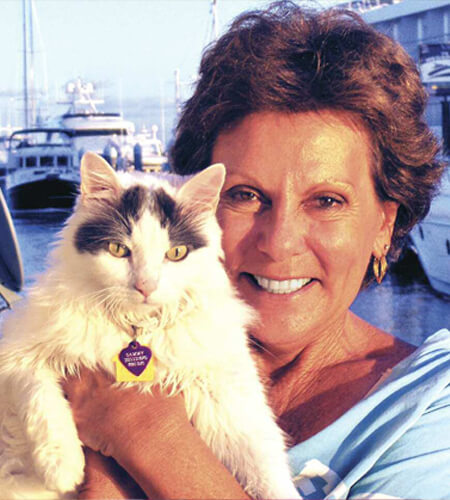 “The outcome of my surgery was nothing less than amazing and I am very lucky. Thank you, Dr. Khouri”

My first diagnosis of breast cancer was in August 1998. I was 48 years old. It showed up on my yearly mammogram. The mass was huge at 3.0 cm and was not there a year before. I couldn't get it out fast enough. I went to the best breast surgeon in Miami, and he performed a lumpectomy and removed 23 lymph nodes. The diagnosis: Medulary Cancer, which is uncommon. I had clear margins after the surgery and negative lymph nodes. With radiation, my survival rate was in the 90th percentile. After 10 years, my surgeon and radiologist said I was cured. I went to Tahiti on my 50th birthday.

Fast forward to August 2010. I just retired and was planning my 60th birthday and a trip. I went for my mammogram, and the radiologist entered the room with the bad news. The breast cancer had returned. There was a small tumor in each breast. She suggested that I get genetic testing right away. They didn't have the test 12 years ago. A few weeks later, the results were positive for BRCA1. I had always had a high chance of getting breast cancer and didn't even know it.

I researched bilateral mastectomies, implants, and other reconstruction alternatives. I read about the different flap procedures where your stomach or back muscles and tissues are used to rebuild your breasts after the mastectomy. The internet said it was like a tummy tuck, but the reality, I later learned, was much different.

I focused on implants and most sites on the internet agreed that if you had radiation on your breast, reconstruction would not be easy since the skin does not stretch easily after radiation.

I asked my breast surgeon, who had followed up on my care for 12 years, and my radiologist for names of plastic surgeons. I picked one. Randomly. He gave me an in-depth description of the TRAM flap procedure and I chose it. Eyes wide open.

My surgery took seven hours, and I stayed in the hospital for five days on Demerol®. The recuperation was long and painful. One month later, I started chemo. Three months later, I told my plastic surgeon that my flat stomach was starting to swell. He said we should just, "watch it." Three months later, I looked like I was pregnant. My breasts didn't look right either.

As soon as I finished chemo I went back in for another procedure. My plastic surgeon worked on my stomach (apparently the screen that was placed in my stomach had stretched and needed to be replaced) and then another surgeon proceeded with a total hysterectomy to prevent ovarian cancer.

My breasts still didn't look right. Throughout the entire ordeal I talked to my plastic surgeon about my breasts. One looked okay, the other looked flat and dented. I told him I wanted it fixed. He didn't seem happy with me. I asked him if he didn't have enough stomach tissue to fill two breasts. He became evasive. This went on and on and on. Finally, we scheduled yet another surgery, this one for fat grafting and implants to help fill my breasts out and make them even. I should have known better.

After reconstruction operation number three, I removed the surgery bra to my horror. My breasts looked like I had two bricks stuck to my chest. I couldn't believe my eyes. When I asked the doctor if he saw what I saw . . . he wouldn't answer. Not acceptable. I was at the end of my rope. I tried to convince myself that I could live like this. The truth was, I could not.

And then along came my angel to the rescue: Dr. Khouri. A friend who saw my distress did some major research online. She told me about his unique fat grafting procedure, and I felt hope for the first time. During my first appointment with Dr. Khouri, he looked at my breasts and said, "I can fix this." He took out a piece of paper and sketched a woman's upper body, showing me what he would do. I was in awe. Not only was he so forthright, but he was an artist! That's when I realized that not all plastic surgeons are artists.

Not being a doctor, I believe that breast reconstruction is not a perfect science. I don't think plastic surgeons can predict how tissue, implants, and fat will settle after surgery on every woman. Women have been settling with ugly, uncomfortable, uneven reconstruction for years.

I think Dr. Khouri understands this problem from the inside out. He understands the materials that are used to reconstruct a breast and their limitations. Many plastic surgeons may realize that there are problems in breast reconstruction, but they don't know what to do about it. At least, that's what I think happened in my case.

This is where innovation comes in. I believe Dr. Khouri is a troubleshooter and an inventor. Creativity in a doctor of plastic surgery is one of the most important elements in understanding the female form. I believe doctors are not taught creativity (if it can be taught). If I have been disfigured in surgery, I want an innovative, creative doctor to fix it. That person is Dr. Khouri and I was lucky to find him. I did not use the BRAVA system as I had enough tissue to work with.

Now I wear a stretch bra on a regular basis. It's comfortable and I forget I have it on. Dr. Khouri can only help those women fortunate enough to find out about him in time. Women need to start understanding the pitfalls of plastic surgery, and the doctors that perform surgery. I learned the hard way (four surgeries later), but I didn't give up. Eventually, I won the lottery.

My breasts are beautiful, I'm cancer free, and enjoying life on a one-year trip on our boat. My advice is: be positive, make things happen, and all good things will come your way.

The outcome of my surgery was nothing less than amazing. Dr. Khouri removed both implants and with added fat, he sculpted the most beautiful breasts that I could ever imagine. This man has a gift. And I am very lucky. Thank you, Dr. Khouri.