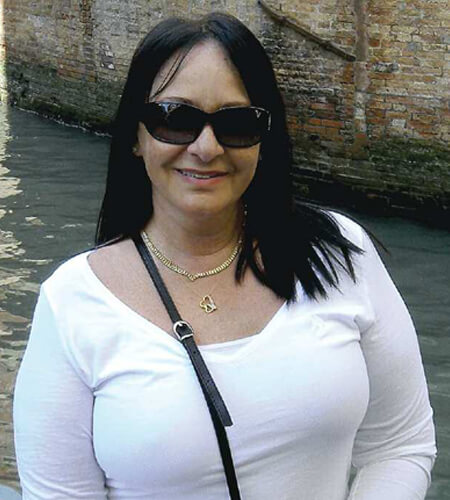 “I'm confident that Dr. Khouri will perform his magic on my breasts and once again, I will be the woman I want to be!”

My story began seven years ago. I had been out of work for a year, found my dream job in August 2004, which entailed traveling around the United States, and met a wonderful man in October 2004. Life was perfect.

Then in January 2005 I rolled over on my tummy—I was a stomach sleeper all my life—and felt something in my left breast prick me. I was startled and immediately turned over and began pressing the mattress trying to find the culprit. I couldn't find anything. The next evening I asked my boyfriend to examine my breast, and he immediately took on the task. He felt what he described as something hard and pointy in my left breast near my nipple.

The next morning I ran to my gynecologist's office, and upon examination, she confirmed that there was definitely a lump. She thought it could be malignant due to the sharp edges. The office immediately scheduled a mammogram and sonogram for me. A biopsy confirmed our fears.

My boyfriend and I met with an oncologist who recommended a radical mastectomy of the left breast and removal of my nipple as the cancer had started in the mammary glands. My first surgery took place on April 15, 2005. My first attempt to get up from bed did not go well as I felt completely off balance. I was mortified, angry, and so very depressed.

My breasts had always been my best asset, and one of them was now mutilated. My boyfriend just held me and told me he loved me and that I was still beautiful, which just made me sob even harder. He is 14 years my junior, and I was certain that once he took one look at me, he would run for the hills. I thank God every day for bringing this angel into my life and on April 29, 2006, we became husband and wife.

I had a second surgery six months later to insert a saline implant that my body promptly rejected. The third surgery replaced the implant with a new one, and my muscle was reattached as it had torn away from the existing tissue. I also had my right breast reduced in an attempt to make them even. My body rejected the second implant as well. It became encapsulated and was so high up in my chest that it was impossible to wear certain types of clothing. Sleeping on my back or my side became very uncomfortable and painful.

I ran into a friend of mine in the spring of 2011 who gently coaxed me into setting up an appointment with Dr. Khouri. I was skeptical at first because I was so tired of being cut open and having such negative results. Dr. Khouri had a very matter-of-fact bedside manner which I loved. It was all a bit confusing at first, but he took the time to explain the procedures in detail and showed me before and after pictures.

My first surgery took place in August 2011 and was difficult and lengthy. He repaired my right breast, which had an unsightly fold on the side, and the left had to be reconstructed from scratch. Dr. Khouri removed the implant and then transferred fat from my abdomen. A tiny implant went in to shape the breast in preparation for the second surgery. I never expected the recovery to be so painful, and once again I came to the realization that I was still on my healing journey.

The lipo procedure was extremely painful and the incisions, which had to remain open to close on their own, oozed a pink liquid for about three days. I could not get in or out of bed without assistance because my breasts felt heavy and painful especially where they had to staple the incisions closed.

I opted not to wear the BRAVA. It looked too large and terribly uncomfortable. I wanted to be done with the process, so I opted instead for the second fat transfer surgery to remove the tiny implant. Fat was removed from the abdomen and stomach this time and transferred into the breast cavity. I still need a third procedure. My husband lightly presses on it from time to time, but we're both still a little shy. I feel so vulnerable all the time.

My poor husband hasn't seen me naked from the waist up in seven years and I know it's so unfair. The surgeries performed by Dr. Khouri were no walk in the park, but for the first time in seven years, I don't have any foreign objects in my body to threaten my comfort or peace of mind. It's been six months since the last surgery and I hope and pray that once I get up the courage to face the knife again that it will be for the last time. I am so very grateful that I can wear a normal bathing suit top and other types of blouses without people gawking at my chest. I feel so much more confident now when I get dressed to go out and go to work.

Even through all the pain and lengthy recoveries, I am glad that I had these procedures done. I look so much better, and I now have a flat stomach and abdomen thanks to the lipo. My faith remains strong in Dr. Khouri and his innovative procedure. I am hopeful that one day soon I will have two breasts that closely match. Once they are as close in size as he can get them, my nipple will be reconstructed and tattooed to closely resemble my own.

My greatest desire is to feel feminine and whole like a woman should. I'm confident that Dr. Khouri will perform his magic on my breasts and once again, I will be the woman I want to be!