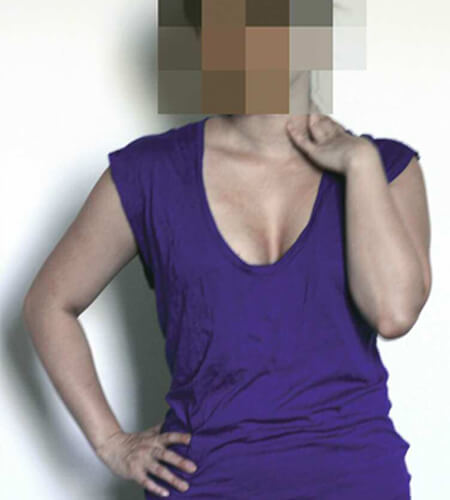 “One day, I happened to come across a random magazine article that introduced Dr. Khouri's revolutionary techniques”

"Despite our general admiration for the go-getter, the one who came from humble beginnings and pulled him or herself up by his boot straps, and our support for and near-obsession with self-improvement, the woman or the man who explores a surgical option to come a little closer to grasping that elusive brass ring we call "beauty" is usually served with a heaping dose of derision." —R.W.

I used to turn my nose up at the notion of plastic surgery, despite really, really wanting a more normal bustline. It seemed like caving in to the admittedly crushing and conflicting societal expectations that women be beautiful yet achieve this effortlessly. We're all supposed to drift out of the ocean on an oyster shell, naturally gorgeous like Aphrodite. I had been very thin as a child, and as an adult I was much less so, yet my chest remained as boyish as ever. On top of that, one breast was at least a cup size smaller, and I had broad shoulders from years of swimming and martial arts. You know it's bad when you find yourself looking at pictures of oily and tanned male body builders and wondering if the same exercises they did to obtain such large chest muscles would work for you.

Shopping for anything was always a depressing experience, and I pretty much resigned myself to adopting a tomboyish style of dress. I learned to laugh at jokes directed at my non-existent breasts, and pretended it didn't sting when a saleswoman told me that they didn't carry sizes as small as mine with that wonderful follow up question "Why do you even bother wearing a bra?"

In the meantime, I threw myself into the aforementioned American pastime of selfimprovement. Exercising to become fitter? Totally okay. Getting a degree from a fantastic school and pursuing my dream job? You go, girl! Getting a boob job because I wanted larger, evenly sized breasts that allowed me to look female and a little more proportional and not because I needed reconstructive surgery? Vain, totally vain, and so, so wrong when there were more serious problems in the world, not to mention a complete betrayal to women everywhere who had worked so hard to achieve the opportunities we have.

Then, when I was 27, I was diagnosed with Hepatitis C. The details are boring, but basically I had an exchange transfusion as a two-week-old newborn due to a bad case of jaundice brought on by mother-infant RH factor incompatibility.

No tests were in place to test for this virus back then. I realized I had spent close to three decades of my life always somehow catching a cold, slogging through a cold, or recovering from one. Some colds were minor annoyances, but most required serious antibiotics and I had already been labeled a hypochondriac. I also realized I had always simply accepted things, regardless of how I really felt. Again, boring details, but I'm sure every woman at some point in her life has or will experience the, "What have I been doing this entire time?" epiphany and decide, "Damn it all to he**, I'm going to do something that makes me happy."

I began to save up for breast surgery. I didn't like the options available, but I was determined to finally be happy with how I looked in and out of clothes. Traditional breast surgery was freaking scary. It either goes on top of your breast tissue or your breast muscle is severed so the implant can be placed underneath. Recovery was supposed to be long and complicated. I began to despair. Then one day, I happened to come across a random magazine article that introduced Dr. Khouri's revolutionary techniques.