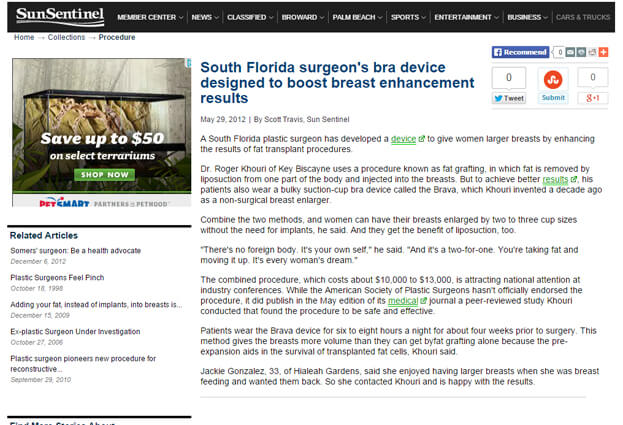 A South Florida plastic surgeon has developed a device to give women larger breasts by enhancing the results of fat transplant procedures. Dr. Roger Khouri of Key Biscayne uses a procedure known as fat grafting, in which fat is removed by liposuction from one part of the body and injected into the breasts.

Combine the two methods, and women can have their breasts enlarged by two to three cup sizes without the need for implants, he said. And they get the benefit of liposuction, too. “There’s no foreign body. It’s your own self,” he said. “And it’s a two-for-one. You’re taking fat and moving it up. It’s every woman’s dream.”

The combined procedure, which costs about $10,000 to $13,000, is attracting national attention at industry conferences. While the American Society of Plastic Surgeons hasn’t officially endorsed the procedure, it did publish in the May edition of its medical journal a peer-reviewed study Khouri conducted that found the procedure to be safe and effective.

Patients wear the Brava device for six to eight hours a night for about four weeks prior to surgery. This method gives the breasts more volume than they can get byfat grafting alone because the pre-expansion aids in the survival of transplanted fat cells, Khouri said.

Jackie Gonzalez, 33, of Hialeah Gardens, said she enjoyed having larger breasts when she was breast feeding and wanted them back. So she contacted Khouri and is happy with the results.”I would never consider going through implant surgery, just knowing you have to replace them, that they have a shelf life and they look different” she said. “I think this has given me a lot of self confidence. Now I’m looking forward to shopping for clothes this summer.”

Whether the procedure becomes mainstream remains to be seen. “It’s a very interesting and innovative method with great potential,” said Dr. Bruce Mast, chief of plastic and reconstructive surgery at the University of Florida. “But I think what’s still unknown is the long-term safety and consequences.”

Mast said the transplanted cells could interfere with the breast cells and create an increased risk of cancer, although more research is needed. For years, the American Society of Plastic Surgeons advised against fat grafting, mostly out of concerns it would be too difficult to detect cancer during breast screenings. But the group reversed its position in 2009, saying radiologists are able to tell the difference between fat injection and something that might be cancer, said Dr. Karol Gutowski, who chaired a fat-grafting task force.

But Gutowski, a plastic surgeon in Chicago, said he’s not sure how mainstream the procedure will be. He said his patients find the Brava to be too bulky and uncomfortable. “I think it will become an alternative for those who want the real thing and are willing to do what it takes to get there,” he said. “But some just want them large and quick, and they’ll get implants.”