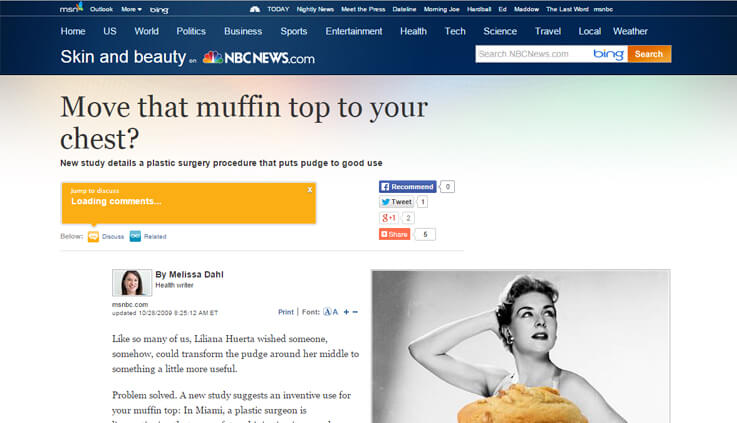 New Plastic Surgery Procedure that puts Fat to Good Use

Roger K. Khouri, MD, FACS Roger Khouri was interviewed by msnbc.com regarding his 5 year 50 patient study of breast augmentation and reconstruction using external tissue expander and liposuction. His study was presented at the 2009 annual meeting of the plastic surgeons’ society in Seattle. Below is an excerpt of the article:

“The procedure combines two of the most popular cosmetic surgeries in America — 307,000 breast augmentations and 245,000 liposuction procedures were performed in 2008, according to the American Society of Plastic Surgeons. It essentially gives patients a twofer, said Roger K. Khouri, MD, FACS Roger Khouri, the Miami plastic surgeon who pioneered the technique and is now reporting results in 50 women.”

“You get rid of the fat where you don’t want it, and you move it where you want it to be,” said Khouri, who recently presented his findings at the annual meeting of the plastic surgeons’ society in Seattle. “The augmentation looks completely natural. This does not have the implant look; this does not have the fake look. There’s no scar, and there’s no incision.”