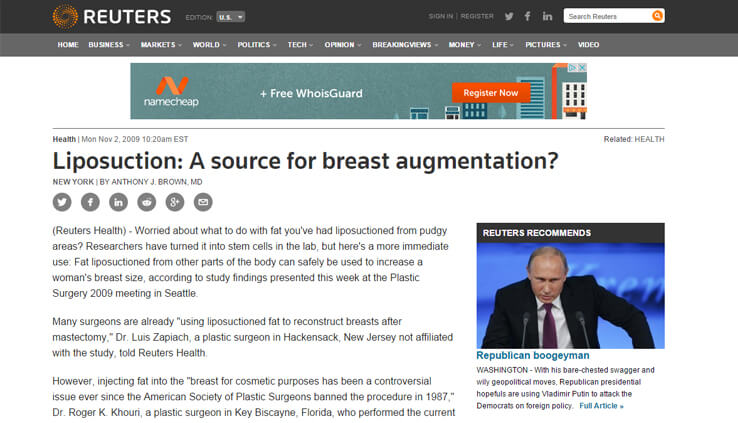 Roger K. Khouri, MD, FACS Roger Khouri was interviewed by reauters regarding the study he presented at the Plastic Surgery 2009 meeting in Seattle. The study revolved around his 5 year research of fat liposuctioned from different areas of the body and used for breast augmentation and reconstruction. Below is an excerpt of the article.

“A key component of the operation, according to Khouri, was the use of a bra-like device he invented called the BRAVA. The device includes a small battery-operated pump that creates suction on the breast. That, in turn, increases volume and promotes the growth of blood vessels in the area. The device was worn for 4 weeks before the operation and for a few weeks afterward.

Women saw a moderate increase in breast size at 6 to 12 months – on average, about 210 milliliters, which could represent a variety of cup sizes depending on a woman’s body type. Over a period of 3 years, breast size fluctuated with weight. All of the subjects were “pleased” with their cosmetic outcomes, the Khouri reported.

Tests indicated that, on average, 18 percent of the transferred fat in each patient died or “did not take.” Zapiach said that this rate is “very low” considering that prior studies have shown rates between 30 and 70 percent.”